Men get naked too

My blog is the number one google hit for “photos of naked middle aged women.” Yep. I'm so proud. That’s pretty much the biggest accomplishment in my life right now. I owe it all to my cooperative women friends, who have selflessly moved out of their comfort zones to pose for me. And my readers (mostly female) who have supported the naked photo project from the start.

At the conference last week, I decided it was time for a naked male photo. Surely, I thought, one of my male friends would cooperate. After all, they are sensitive feminist guys, willing to talk about gender stereotypes. They are intellectual guys who would surely want to extend the discussion of body image to their own gender. They are generous guys who, quite literally, were giving me the shirts off their backs and the socks from their suitcases.

“No way,” said Artist Friend. “But I’ll ask my roommate, Ghana Priest. You want to write on his skin? You’ll need a silver sharpie.”

Philadelphia Guy mumbled something about how he didn’t have tenure yet. “But how about my roommate? He’s got cool tattoos. You wouldn’t even need a sharpie.”

When I sat near him at the Saturday business lunch, I said to him quietly, “I’ve got my camera with me.”

We had to move quickly. The lunch ended late, and he had plans to attend a panel that began in about five minutes. But the photo shoot didn’t take long. I yanked the blankets off his bed so we’d have a white background, he took off his clothes, and I snapped the shot. Minutes later, we were both heading down the hallway to our respective afternoon conference sessions. 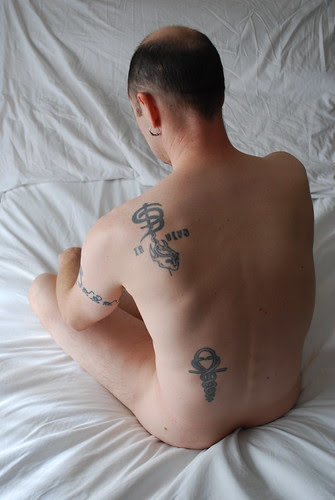 He doesn't look like an academic to me. Nice shot!

Hey, Skinny Puppy did that song for the Free Hugs video, I think. Nice. Good. All good. You are an inspiration.

I dont think men have as much pressure on them as women to look a certain way, but there is some. I know that as I get older, I feel more and more self-conscious about my receding hairline, my weight gain, that kind of thing. So yea, men have to deal with body image too.

Jo(e), I gotta know...what does your husband think about all these naked photo shoots with men?

Love the tats. I'm assuming you didn't draw those on with pen, right?

Anon: Yes, I've heard men say that. I think our culture puts pressure on everyone to look young and thin.

Lorianne: No, I didn't draw on this model! The tattoos were already there.

My husband hasn't really offered an opinion on the naked photo project. Mostly, he seems to fall in the camp of Artist Friend and Philadelphia Friend: he's all for it as long as he doesn't have to pose himself.

..and besides "all those naked photo shoots with men" is a bit misleading. What, are there three?

I'm not a fan of tattoos generally, but they look rather nice on that naked guy.

FA: Ha! I just clicked through to check my "Naked" album on Flickr. Out of 39 photos, only 5 are of men.

Magpie: I don't have a tattoo myself -- it's not something I'd do -- but I am interested in the stories that go along with tattoos. Sometimes they are sad or painful; sometimes they are about celebration and healing.

I did have a long conversation with Sharp Guy about his three tattoos -- but I ended up not putting the stories on my blog.

Those other guys are wimps. My guy would do it.

If you ever pass through New Zealand,my 53 year old partner would pose for you in a second. So would my four year old daughter. Keeping them both clothed requires a certain amount of energy.

I'm amused by Philadelphia Guy now citing his lack of tenure as his reason. Earlier, if I recall correctly, it was because he was on the market. Makes me curious as to what the rationale will become once he does get tenure.

Kimberly: If I ever make it to New Zealand, I'll take you up on that offer!

Rana: What's ridiculous is that I don't have a naked photo of *you* .... perhaps in Bloomington?

Lovely addition to your collection!

You might want to change the description of what he does, because a google of it led straight to his faculty web page.

my husband was very confused when he walked up behind me and saw me reading this blog post.

it's nice that you found a man who wasn't all talk, bringing a new twist to your naked shots.

I've enjoyed discovering your blog and thought to hit the year ago tab to see what was posted in 2010 and since you had a naked post here I couldn't resist a comment. :)

That's funny about being your "blog is the number one google hit for “photos of naked middle aged women.”" Judging by the skew of gender poses I guess that's not the same for a search of men.

I like the quick thinking it putting the white sheet over the headboard. The natural light is lovely on him