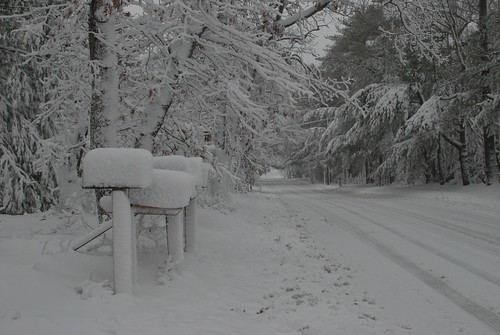 The threat of a big snowstorm heading towards Very Long Island did not stop me from making the drive to visit my sister, brother-in-law, and their very cute twin babies. In fact, I was hoping to get snowed in. Any excuse to stay and play with my six-month-old nieces.

I wasn’t disappointed. The snowstorm dumped a whole bunch of snow on their little town. Inside the house, my sister built a fire in the fireplace and we played with the babies, who are just beginning to crawl. My sister had thought to buy wine and chocolate in anticipation of the blizzard. My brother-in-law, who loves to cook, made us a feast of Mediterranean food which we ate with warm pita bread.

When the babies took their afternoon nap, I put on my winter clothes to take a walk in the storm (and to do a little freelance photography for the Hampton Bee). It was funny to see this little beach community all covered in snow. An emergency ban kept vehicles off the road, and I saw very few people as I trudged into a wind that stung my eyes with bits of sharp snow.

I did find one little store that had stayed open during the storm. That’s is where I encountered my first hardship of the big storm. They had sold out of chocolate chip cookies. I had to settle for oatmeal raisin. But I put the cookies inside my coat to protect them, and I trudged back along the snow-covered streets, feeling like Pa Ingalls carrying a bucket of wheat back to the claim shanty. 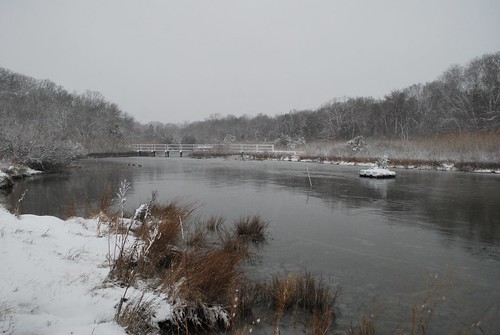 And the big question is: Did any of the cookies make it back for sharing?
And gotta say, I like your sister's style. While everyone else was loading up on bread and milk, she headed for the wine and chocolate.

Beautiful photos -- but oh, the dig out! We in Michigan are glad this one passed us by! Yet, you can't deny the beauty!

Yes, I did make it back safely -- with the package of cookies still unopened. The first thing I did when I got back to my sister's house was put the kettle on for tea so we could eat the cookies.

I envy you. I am shortly being exiled to carry out some remodeling work at home and am looking forward to spending some quality time with my grand nephews and other relatives and friends in the South of India. I will be writing about it anon in my blog perhaps in the last week of February.

I just read this! (Did you write it at the library?) We miss you and wish you were still here!

Yep. I wrote it at the East Hampton Library. I feel like it's already been ages since I saw the twins ....

Beautiful winter. I hope this February is kind to you.

Beautiful photos. The only time I have seen a blizzard amount of snow, I wasn't far from the beach either. But that was a South Carolina beach--not a place where you should get 24 inches of snow. I was young and had plenty of groceries, so my memories are good ones.

Those are lovely! We,too have a storm, mostly freezing rain this last while, and my neighbour who-photographs-everything has posted iced berries and even more iced dog.
I do admire your skill with a camera and your ability to describe so vividly.