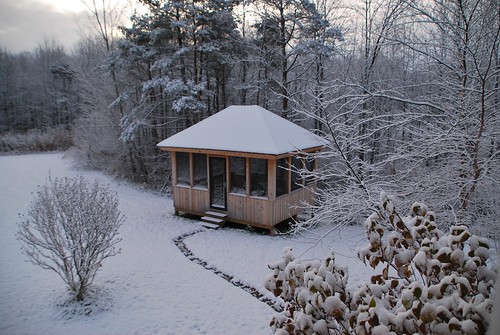 This morning, we woke to a snow-covered world. Winter has arrived. It seems the older you get, the faster the seasons change.

The last few months have been a time of transition. In September, I became a grandmother! Boy-in-Black and his wife BlondeChef have a little boy now. Well, actually, he’s not all that little. He was over ten pounds when he was born, and he’s been growing steadily since. TotoroBaby is a sweet, sleepy baby, much like his father was. The best part is that my husband and I get to see him as often as we’d like, since my son and daughter-in-law live fairly close by.

Within 24 hours of becoming grandparents, my husband and I became Empty Nesters. Yes, my youngest son, With-a-Why, bought a house. He and ShySmile moved in that weekend. I’d feel sad about the baby of the family being all grown up, except that I’m so pleased at what a nice young man he’s become. Besides, his house is less than two miles away. All four of my kids live within 15 miles of me.

Other changes are happening too. My parents, who still live on their own about six miles away, are in their late 80s now. In September after a mini-stroke, my father was admitted to a hospital for the first time in his life. There was no lasting damage, and he is back to his old self, but still, it was an incident that made everyone in the family realize that we need to treasure what time we have left with my parents.

The snow outside my window is making me look forward to the holiday season. In my family, the get-togethers, the cooking, and the celebrating begin the weekend before Thanksgiving and go all the way to January. Red-haired Niece is expecting a baby in December so by Christmas, we’ll have seven little ones in the family, which will make the holidays that much more fun.
Posted by jo(e)

Congrats on becoming a grandmother! How wonderful that your family is all so close, both in terms of proximity and love. This is the dream. You've made it real. Glad your dad is ok.

So many changes. Some lovely, and some less so (despite being expected/inevitable).
And yes, I hear you on the time whizzing by. Two minutes ago it was Christmas, and now the new version is looming.
Glad that you have family close by.

Congratulations on being a Grandma! What fun to have a new baby so close by to spoil and cuddle and send back home again! They grow up so fast! :)

congrats grandma...i LOVE the sweet names you have selected for everyone!! my first born was 10.8 pounds and it was much less common 37 years ago. still 10 pounds is something to be very proud of.

i hope you enjoy your empty nest, the hubs and i are fine with it, in fact, we rather like it!!

beautiful picture of the snow. i am waiting impatiently for my first snow, it may be coming next week!!

It's so good to see a post here full of such loving good news. Glad all is well and that your family is close by. Enjoy every moment of it.

Congratulations! Your nest may have emptied, but you can now enjoy the nest-adjacent filled with your new grandbaby. Good timing!

Lovely snow. Such a richness of family.

Oh wow! Boy-In-Black is a dad! Have I really been lurking on your blog that long!? I guess I did start reading when I was a grad student, and now I'm a professor. Goodness... now I feel the changing of the seasons. Congratulations to all!

Oh dear, you made me all teary-eyed right now!! Such a momentous transition, becoming an empty nester within 24h of having your first grandbaby! Just WOW! How serendipitous!

And how marvelous that all your kids live within 15 miles of you and you live so close to your parents. It makes me feel guilty at my choice of moving 9,000 miles away from my parents. I hope my sons don't go THAT far away, but I have to brace myself for them moving away too. Sigh...

Please keep sharing your life with us here, even if now infrequently, like me (but much more frequently than me, for sure!).

I will see my parents for a couple of weeks in December and I am happy about that. I'm sending my youngest to spend 5 months close to them in Brazil. It's almost nothing to them, who have had me gone so far for 23.5 years, but they "planted the seed" for my brother and I (he lived in China, New Zealand, and now Indonesia) to conquer the world, so to speak as I blogged about many years ago. Too lazy to go find the link and then to an HTML tag as I used to do expertly back in the day.