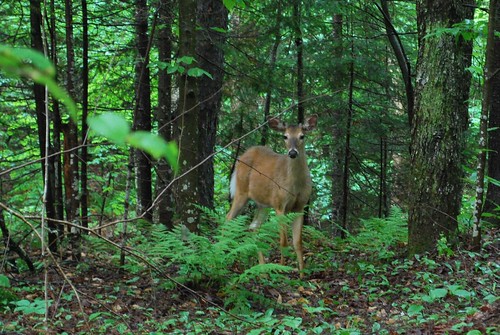 Because the summer season in the mountains hasn’t begun yet, the wildlife still have most of the park to themselves, even in the hamlets. We saw deer ambling across the lawns of summer cottages, enjoying the unmown grass. A wild turkey watched us from the side of the road, just outside town. We stopped one morning when we saw a teenage girl standing guard over a big snapping turtle that had wandered onto the road. “I don’t want it to get hit,” she said. We took turns poking and prodding the turtle until we were able to coax it off the pavement and down into a shady gully.

In the little town, many of the businesses were closed. No one stood in line at the ice cream stand. We had the public dock to ourselves as we wandered about in the evening sunlight. Floating docks were still pulled up on the shore all along the lake. The little playground, where we used to bring out kids when they were small, where in fact I played when I was small, was quiet. My father, who worked in the mountains as a musician back in the 1950s, always says, “The season in the mountains is really short. Just July and August.” It seems like he’s still right. The only people we saw were townspeople: the young couple who own the inn, an elderly woman who needed a ride to the grocery store, the teenager rescuing the turtle, and a couple of local boys sitting at the end of a pier after an afternoon of fishing. 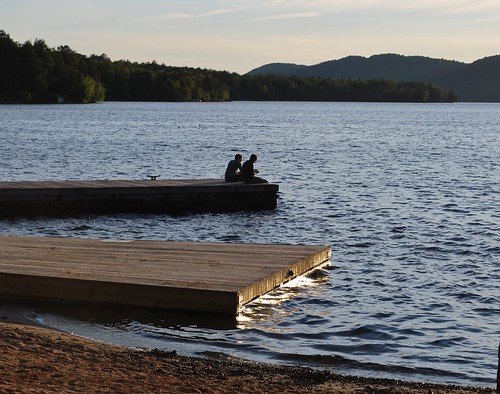 nature, life without cell phones, it's a beautiful thing. i adore these images and the turtle story...all right up my alley!!!

Sounds like my kind of holiday. Quite and serene.

Sheer bliss.
We don’t have a lake but we have quiet hills and small villages where nothing much happens.

O, hang on, plenty happens, but that’s just the locals having fun.

I would love the solitude and beauty!

I wonder if it is because the water doesn't warm up til July? That doesn't stop people around here, but I don't get in till at least the middle of July...brr, too chilly for this old lady.

Terri: The air wasn't that warm either. I was wearing jeans and a fleece. I think another factor is that the public schools in the area are still in session, so families don't take vacations until July.

I'm loving your recent spate of blogging. The pictures, the stories: all wonderful and nourishing.

Can I just spend a summer with you and follow you around like a puppy dog to all the great places you go? I drool less than a dog.

Amber: And you don't bark either, which is a nice feature.

I think you *would* love the places I've gone to so far this summer.

I think the shoulder season can be the best time to be somewhere. Certainly this sounds like your own beautiful haven, especially at this time of year. I feel that way about the lake I go to in Northern Michigan. I love the summer for the weather, being able to swim and enjoy the warmth but I don't enjoy the crowds in town, the proliferation of jet skis on the lake, the extra people. I like it quiet, so June and September/October seem to be my favorites. Lucky you, to see that graceful deer. Such a gift!