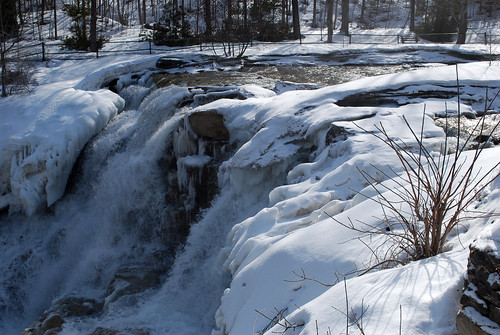 You can tell a whole lot about a kid’s parents by the way a kid talks. That’s how I know Biker Boy’s adoptive parents even without spending much time with them. (Long-time readers will know that Biker Boy used to live on my street: I’ve known him since he was seven years old.)

The adoption didn’t become final until last November, but it’s been a whole year since Biker Boy moved into his new home. And it’s wonderful to see the changes in him. Gone are the angry outbursts. Instead, he says things like, “Let me know if you help with that. I’d be glad to give you a hand.” Phrases like that make him sound so adult that it makes me smile. And it’s pretty clear that he’s saying something he’s heard his adoptive father say to friends.

Last Sunday, I picked Biker Boy up mid-morning, and we drove to a park which has a spectacular waterfall. That’s our usual routine: I take him someplace outdoors and then we get pizza. We had planned to hike down to the bottom of the falls, but it soon became clear that we were way too early in the season for that. Even the steps down to the covered pavilion were so icy that we ended up going through a drift of snow instead. The waterfall itself was half-frozen, like a dramatic white sculpture, but water still came roaring down, spraying the rocks and cascading down into the stream below.

Biker Boy and I tramped through the snow until we got as close as we could to the top of the waterfall, the icy cold water spraying onto our coats. We stood there in the snow and talked — about his struggles at school, about the work he’s doing with a therapist, about the hamster his parents are going to get him.

Then we left to find a warm pizza place, where we could sit and eat hot slices while our feet warmed up. “I wish I could have been adopted a long time ago,” Biker Boy said to me. I knew what he meant. He’s got a whole lot of baggage to work through. But I have no doubt he’ll make it through.

We’ll go back to the waterfall again sometime after the rest of the snow and ice melt.
Posted by jo(e) 12 comments:

Every day during my writing retreat, I took a walk outside. Most of the time, I wore jeans and a t-shirt. No coat! No mittens! I'd wake up early, eat breakfast, and then take a walk outside. I'd write furiously for a couple of hours, and then go outside to sit in the sunshine for awhile. Then I'd eat lunch, write for a couple of more hours, and then go for another walk in the sunshine. I think I could get used to that kind of life. It's lovely.

I'm back home now, where it is most certainly not spring. We've still got snowbanks along the driveway, and solid patches of ice. I brushed snow off my car before I drove to work today. And I'm still wearing mittens, a scarf, and winter boots. That lovely week in the sunshine seems really long ago.
Posted by jo(e) 4 comments:

All week in Southern City, I kept noticing flowers. They were blooming everywhere. Trees with white blossoms outside of grocery stories, bunches of yellow daffodils along trails at the retreat center, flowers planted in window boxes and gardens, purple-blue flowers under pine trees. This blossom had already fallen to the ground, so I carried it back to my room, where I could admire it some more.
Posted by jo(e) 4 comments:

I’m on a writing retreat this week in a southern city, staying at a Jesuit retreat center where silence is observed. Flowers are blooming here, and it’s warm enough to feel sunshine on my bare arms. I love seeing photos of the snowstorm back home while I’m walking trails along the river and taking pictures of daffodils. I’ve been tempted to keep posting sunny photos to facebook so I can gloat to my friends, but I’ve resisted. Even though I can access the wireless here, I’m trying to stay unplugged because I’m working on a manuscript, revising furiously to meet a self-imposed deadline.

But still, I have an obligation to my blog readers, and so I offer you a naked photo.

No, this isn’t one of the Jesuits. Yeah, they’re pretty liberal but they’re not THAT liberal. And no, it’s not one of the other retreatants. They keep silence here! I have no way of offering any of them the opportunity to pose. I’m pretty good at communicating with hand signals — just yesterday I silently asked another guest where we were supposed to put our cloth napkins after the noonday meal. But to explain Project Naked without words might be more of a challenge than I’m up to this week.

This photo is one I took at the big creative writing conference I attended recently. I’ve known Kestrel for a couple of years now. I love that he chose the name of a bird for his pseudonym (that’s the perk of posing naked for me — you get to choose your own pseudonym) because his poetry is filled with references to birds and an awareness of the natural world. It’s also appropriate that I post his photo while I’m on a writing retreat that includes spiritual reflection, because he’s a guy who thinks thoughtfully and sensitively about spirituality. I like to think that if he were on this retreat with me, he’d be doing just what he’s doing in the photo: staring out the window after reading some poetry, lost in thought. Except, yeah, he’d probably have some clothes on.

The second day of the conference, my roommate went running early and then came back to take a shower. I could tell from the clothes she’d laid out on the bed that she had something important going on: an interview, a meeting, something that required her to dress formally. But still, the morning light that shone in the window was lovely, just right for a photograph, so when she emerged naked from the bathroom, I said to her, “Could you just climb up on the window ledge for a moment?”

She looked at the camera in my hand and laughed. “I only have a few minutes,” she said. I took that as a yes, and began moving furniture, yanking a lamp out of the way. Maine Writer climbed, obligingly, up onto the window sill.

“Like bridge?” she asked, leaning back to flex her back into an arch, “This ledge is kind of narrow, but maybe I could — aah!”

Maybe there’s a reason that yoga studios have a wide flat floor instead of a bunch of narrow ledges. My naked roommate tumbling to the floor wasn’t exactly the shot I had in mind for my blog. After all, posing naked is supposed to be empowering. I figured if she ended up in a cast, that would undermine the whole project. Plus, make her late for her interview. We didn't want that.

“Um, maybe this time you should brace yourself with your hands,” I said helpfully. “Take up the whole window.”

Maine Writer is a strong woman, who was not at all daunted by the fall. Brushing the carpet lint off her bare skin, she climbed back into the window and flexed her muscles, like a deity holding up the world.

Sunshine on the west coast

I've spent the last five days in a lovely West Coast city, where the blue skies made me keep humming an old Bobby Sherman song. Most of my time was spent in the conference rooms and bookfair of a large hotel, but I did sneak out with some friends for a walk. We couldn't resist the sunshine glinting off the old buildings and calm waters. We went down to a waterside market where vendors had filled stalls with slabs of pink salmon and brightly colored fruits.

"Look, kumquats!" a friend exclaimed. I had never eaten a kumquat so she bought some and insisted I try one. Following her instructions, I popped the little fruit into my mouth and began to chew. The explosion of sour juice surprised me at first, but as I chewed, the taste became sweeter. We wandered about, tasting nuts and bits of fruit.

When we walked down to find the chocolate shop, we discovered a wall decorated with all kinds of colorful (and already chewed) gum. Yeah, that sounds disgusting, but it was really quite beautiful. And the scent, as we walked by, was unmistakably sweet. We found a cafe above the water, where we lingered over lunch, talking and catching up on our lives before walking back through the sunshine to the frantic busyness of the conference.
Posted by jo(e) 7 comments: