In sickness and in health

The travel gods conspired against my conference roommate, Maine Writer. First she was told that her flight was going to be late. Then it was cancelled. So she got on a train, which -- based on the texts she kept sending me -- was only minimally faster than a dog sled. She arrived in the middle of the night, missing the dinner she had planned, where friends toasted her health in her absence.

She also missed the lovely, sunny weather that we all enjoyed the first day of the conference. During the three hours of sleep she got that night, a cold front rolled in. As she walked over to the conference center to give her talk, bitter winds slapped cold air against her throat, her forehead, and her bare legs. The toast to her health was clearly defective. By the time her panel ended, she was flushed and running a fever. Her usual throng of admirers, rushing up to talk to her about her upcoming book, didn’t seem to notice.

“Are you meeting us for dinner?” I texted her from the back of the room.
“Can you get me some drugs?” she texted back.

That was her conference: hours of traveling and a miserable cold, with very little time to spend with her friends. Yet, despite these dreadful conditions, Maine Writer remained loyal to the naked photo project. She knows the tradition: anyone who rooms for me has to pose. I was willing, at this point, to let her off the hook, but she insisted.

"Of course I still want to pose," she told me. We went together to the hotel spa on the third floor, which had a sauna. “This heat feels so good,” she said. "I've been shivering all day."

Then she stretched out on a bench, naked. “This is all I have the energy for.”

We’d been talking earlier about self-care, and I’d listed the things I do for myself: long walks outdoors, potluck meals with friends, making time to read and write and meditate. Sometimes self-care means just taking the time to be still and listen to our bodies. Especially when we’re away from home and miserably sick. 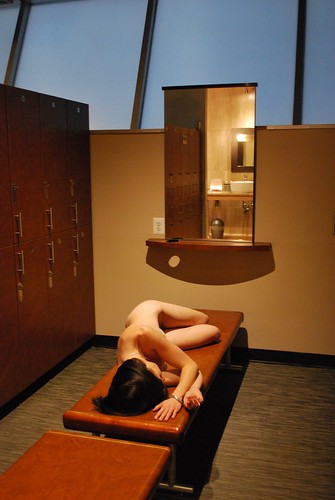