View from my kayak 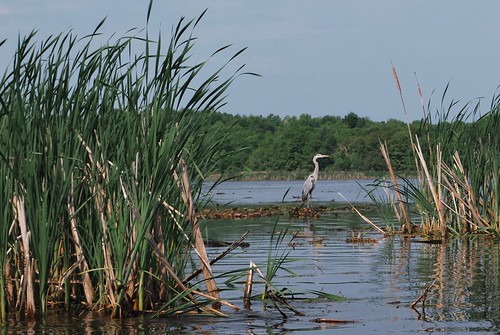 For Memorial Day weekend we went, as we have for decades, to my parents' camp up on the river. The weather was so warm this year that it felt like summer. Remember how cold the nights can be in May, I'd brought a fleece, but luckily I had my bathing suit as well. It was swimming weather!

One of the things I love about camp is getting to spend time with my extended family. But I also like to slip away by myself in my little red kayak. Camp is on a peninsula of oak trees that pushes into a huge marsh, and I like to paddle down the little creeks.

This weekend, as I glided along, I could hear noisy splashes on either side of me. The carp were spawning. The carp are, by far, the biggest fish that I ever see in the river. They weigh 10 to 30 pounds (The state record is 50 pounds, 4 ounces), and I'm pretty sure that they could tip my little kayak over if they tried. As I watched them swim under the kayak, their dark shapes gliding through the muddy water, I could hear the music from Jaws in my head, which added a little excitement to my paddle.

The noisy carp helped camouflage the sound of my paddling, which meant that I could glide right up to a great blue heron who was standing on the edge of the marsh. When I was within fifteen feet, I stopped paddling and just watched. The great blue heron always looks to me like it came out of some other time period, long before cell phones, laptops, or even the industrial revolution. The heron took no notice of me until I drifted even closer, and then she rose into the air with almost no effort and flew off to a different part of the marsh. 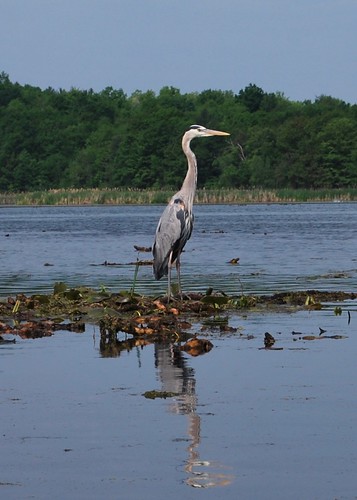 Who doesn't get naked in a cemetery? 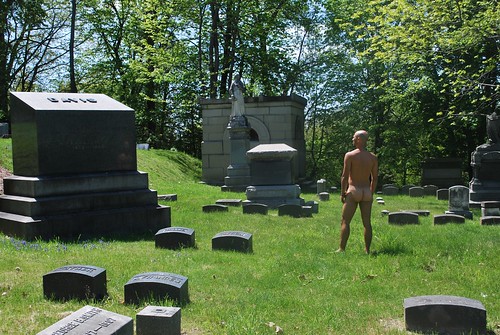 We met at the grave of Susan B. Anthony. And within ten minutes, he had agreed to pose naked for my blog. I love cooperative strangers.

The latest Project Naked adventure began when a couple of friends discovered that Frederick Douglass was buried in a cemetery just a few miles away from the campus where we were attending a conference. We agreed to slip away from the conference for a couple of hours so that we could take a walk in the sunshine and visit the gravesite. “We will be back by the 3 pm session,” Scrivener promised as he slid behind the wheel of the car.

“Hey, I’m bringing my camera, just in case any of you want to pose,” I said. Scrivener and Allistelling looked at each other. I knew what they were thinking: no way in hell. It’s a weird thing about my male friends. They love to talk about the naked photo project, but when it comes to actually taking off their clothes, they balk.

“It’s BECAUSE we’re friends,” Scrivener explained. “That makes it weird.” I rolled my eyes at this extremely lame explanation. Allistelling didn’t feel the need to give an excuse, but it was clear he had no intention of posing.

Candy Corn, the fourth person in the car, was curious about the project. We’d met just that morning, but somehow my naked photo project had already come up in conversation. “How do you get people to pose?” she asked.

I shrugged. “Mostly, I ask, and people say yes.” She looked incredulous at that explanation.

The cemetery was a lovely place for an afternoon walk. It was May in Camera City, which meant that lilacs were blooming, and green was bursting forth on trees everywhere. We easily found the grave of Federick Douglass. Then, with Scrivener consulting his phone, we wandered off to look for Susan B. Anthony. We passed a lawn of bluebells, some huge old trees, rows of grey tombstones, and a woodchuck who darted out of his hole to watch us walk by.

The tombstone for Susan B. Anthony was small and grey. We were sitting in the shade near the grave, talking quietly, when two young men walked over. They were carrying a sheet of white paper, which I recognized immediately. They were going to do a tombstone rubbing. I couldn’t resist snapping some pictures as they worked, and then I gave them my card.

“Send me an email, and I’ll send you the photos,” I said. That’s when we started talking. Cemetery Guy One said that the rubbing was for a friend’s project. It’s called the Gay Rub.

“Whenever I travel, he sends me to a cemetery where a famous LGBT person is buried, and I do a rubbing,” he said.

Yes. Every time he travels, he takes a couple of hours to make a rubbing for his friend’s project. That’s the cooperative spirit I like to see.

“Naked?” he said, laughing. “I don’t know if I want to pose with my dick hanging out.”

“Not that kind of photo,” I said. "And you get veto power, of course." I would have pulled some images up on my phone, but there was no wifi in this sprawling cemetery.

Cemetery Guy Two jumped into the conversation. “I posed naked for a friend last week,” he said helpfully. He gave Cemetery Guy One a look of encouragement. That’s really all it took.

“This will just take five minutes, I promise,” I said to my friends. We left them sitting, fully clothed, in the shade while I walked with Cemetery Guy One and Cemetery Guy Two over to the next section of the cemetery. We talked fast as we walked — about nudity, about body image, about gender.

“We’ll have to finish this conversation over skype,” Cemetery Guy One said as he stripped off his clothes.

“For sure,” I said. “The conversations are the best part of this project. Um – can you turn that way a bit more?”

Cemetery Guy One was a natural. He turned to look at his reflection in a tombstone, and I snapped the photo. Then I called for him to jump up and down, and I took some ridiculous shots of him in midair.

By the time we rejoined my friends, they were laughing. “We saw you jumping up and down,” Candy Corn said. “I love how comfortable and free you seem to be.”

I wanted to stay and talk for longer, but we had a 3 pm session to get to. “I want to look at your friend’s project,” I said to Cemetery Guy One. “I guess I can just google Gay Rub?”

"Really,” said Cemetery Guy One. They both laughed.

“I’ll send you the link,” Cemetery Guy One said. “And we’ll skype one of these days.”

My friends were already walking toward the car. So we hugged goodbye. “Oh, and you get to pick your own pseudonym,” I said as I walked away. "Send it to me in an email."

“What?” Cemetery Guy One teased me. “I’ve got homework?”

We had to part ways — my conference was calling — but we’ve since exchanged a flurry of emails. He told me that he and his husband are going to ride their bikes from San Francisco to Los Angeles in a seven-day 545-mile charity bike ride called the AIDS/Lifecycle. It’s an event that includes more than 2000 cyclists and will likely raise millions of dollars. I think that’s how he chose his pseudonym. “I can be Queer LA Cyclist,” he said.

And so it was decided. Cemetery Guy One is now Queer LA Cyclist. Next time, I'll get a picture of him with his bike.
Read more about the history of the naked blogging project and check out the gallery of photos
Posted by jo(e) 13 comments:

It's a digital world

My college-age son, With-a-Why, leaves tomorrow morning for a summer abroad. On his facebook page, he posted a message to let friends that he wouldn't be getting text messages: "My phone will not be in service over there, so if you want to contact me, it will have to be via email, Snapchat, Whatsapp, Facebook message, or carrier pigeon."

Immediately, everyone began posting silly ways they might get in touch with him. Urban Sophisticate Sister said she was going to send smoke signals from the eastern most point of Long Island. Sparkly Eyes said, "I'll make sure Film Guy sends a raven should a king be deposed or the like." Someone else said, "I'm buying an owl."

Then Shy Smile, his longtime girlfriend, left a comment saying that she might send him some snail mail. Yes, something in an envelope with an address and a stamp on it. The ridiculous thing is that I had not even considered that option.
Posted by jo(e) 12 comments: 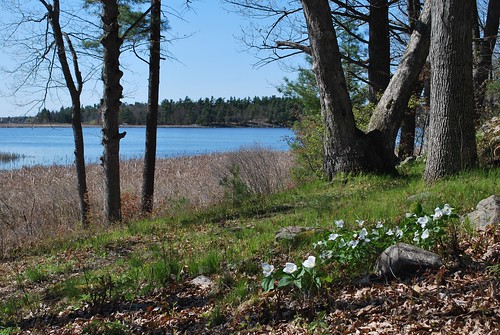 When we had a couple days of sunny weather last week, I drove up to camp with my parents. Their camp is just about a hundred miles north, a peninsula of oak trees set in a marsh on the Big River That Runs Between Two Countries.

Usually camp is in the deep shade of oak trees so it’s funny to be there in early spring when the trees are still bare. The sun shone down on the picnic tables, the firepit, the outhouse, and the empty dock. The trilliums, those lovely spring wildflowers, were still in bloom, growing in clumps amidst the dead oak leaves.

We took out one of the canoes — with my father in the bow, my mother sitting in the middle, and me at the stern — and paddled about the bay. The summer camps we passed were still boarded up for the winter. When I reached my hand into the water, it was icy cold. But the sun, beating down on our bare heads, felt warm. Summer will be here soon. 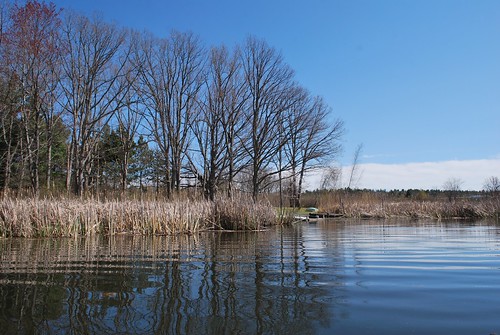 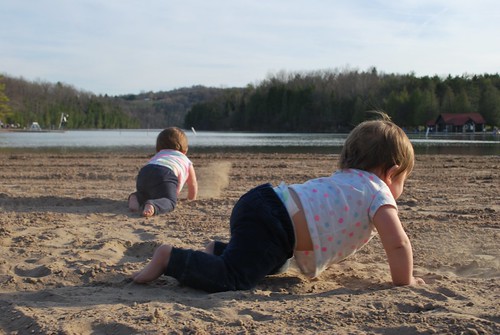 Even though I raised four kids myself, I forget how fast babies change. My sister’s twins are crawling already! When she came for a week-long visit, the whole family was excited to spend time with these adorable little girls.

My parents’ lawn was still pretty wet and muddy. Parts of my yard were still under water. Yes, that’s what spring is like here. But we took the babies to Pretty Colour Lakes, where the sandy beach had dried nicely in the sun. When we set the babies down, they both took off immediately, scurrying on hands and knees towards the water, like speedy little turtles.
Posted by jo(e) 11 comments: