Naked in the sunshine state 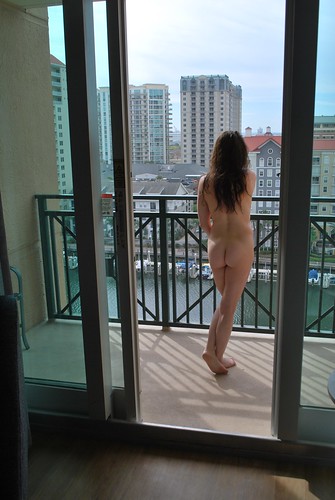 Last month, when my usual conference roommate had to cancel her plans to come to the Big Creative Writing Conference, I found myself scrambling at the last minute to get a roommate. I sent out a plea, and within a few minutes, Gorgeous Writer Who Likes to Ski sent me an email.

Her quick willingness to invite me to share her room was lovely and gracious, but seconds later, another email chimed in. Her message got right to the point: "But I'm not posing naked for you."

I figured that with 10,000 writers all gathered in one place, surely I could find another volunteer.

First I asked a certain Red-haired Activist, who keeps promising that he'll pose SOMEDAY. I suspect by now that SOMEDAY will never come, but it's a tradition me to ask him. At the end of a ridiculous conversation in which he made promises about poses that weren't even possible unless he was secretly a contortionist, he admitted, "I'll probably never pose. I'm really just a tease." Yeah, I knew that.

It's my experience that women are more likely pose anyhow. "It's because we're used to it," one woman said when we talking about it at the bar. "We know it's expected of us."

"But this project subverts that," said another woman. "We're used to posing for the male gaze, but instead, we get to choose the pose that we like."

I love how my women friends get me. And I love how quick they are to volunteer. I turned to my friend Free Woman and said, "Hey, what are you doing tomorrow morning?" And she responded, "Posting naked for you." That's the attitude I like to see.

We were in the Sunshine State, so of course we immediately made plans to take advantage of the warm weather. "I've got a balcony," she said. Perfect.

It was still chilly outside when I arrived at her room the next morning. Free Woman and her partner had just finished eating breakfast on the balcony. I began moving the furniture into the room while she looked down at the river walk below, a lovely and it turns out, a very public place.

"There's a whole group of people just standing there," she said. It's true. I'd seen them on my way up. They were waiting for a tour or something.

"Oh, they aren't looking this way," I assured her. So she stripped off her clothes, while I tried to wedge myself into the farthest corner of the tiny balcony. I wanted to get her whole body into the picture, but the size of the balcony made it difficult. I could probably have gotten a great shot if I'd climbed onto the railing and leaned way out, but we were several stories up. I thought risking my life for the project might be just a bit much.

Free Woman's partner sat inside on the bed, looking at his laptop. That's usually what happens when there's an extra person in the room during a photo shoot. They generally try to stay out of the way. But then he looked up. I could tell from his face he didn't think me climbing up onto the rail would be such a great idea. "Take the shot from here," he said. "You could frame the shot with the door."

I moved quickly inside. "Just act natural," I called to Free Woman. But she wasn't even listening. She was leaning on the rail of the balcony with one elbow and looking out to see if anyone was looking at her. That's when I snapped the photo.