And the season changes 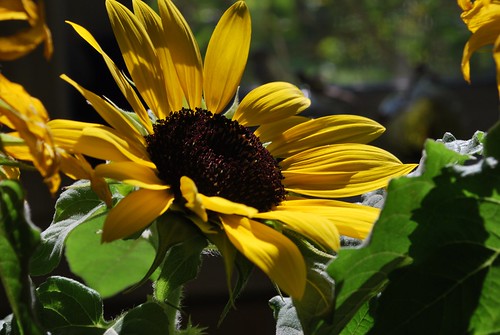 This morning, I had to wake up to an alarm clock, put on real clothes, and drive to campus. Fall semester has begun. I don't know how it happened, but somehow another summer has gone by.

With-a-Why, my youngest, is entering his junior year of college. A music major, he's auditioning for a jazz singing group, so he spent last night at the piano, playing and singing The Girl From Ipanema. Boy-in-Black and Beautiful Smart Wonderful Daughter, who had come by and were just hanging out in the living room, offered helpful suggestions as he practiced scatting. When Boy-in-Black took a turn at scat, he sounded like the bear in The Jungle Book.

My son Shaggy Hair Boy and his wife Smiley Girl are back from their honeymoon. They both teach in the public high schools in Snowstorm City so they will going back to work soon. My daughter, a clinical psychologist, starts her final internship tomorrow. And Boy-in-Black started a new job a few weeks ago.

So we're all busy. I'm always sad to see summer end, but I'm looking forward to everything that fall brings: homemade apple pies, a weekend in the mountains, get-togethers with friends, and a crackling fire at the hearth.
Posted by jo(e) 12 comments: 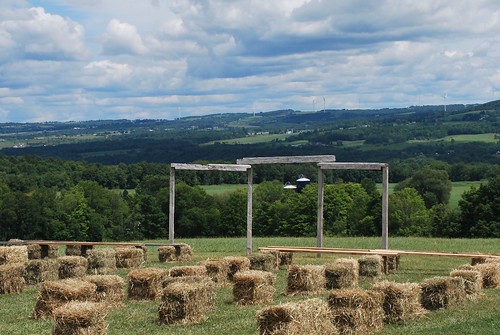 I’ve had a fantastic summer, with lovely trips and good family news. My brother-in-law’s cancer is in remission, my youngest sister’s twins were born healthy and beautiful at 38 weeks, and my eighty-something parents are still both in good health. The summer ended with an exciting event: my son Shaggy Hair Boy and his girlfriend Smiley Girl got married. I’ve gained a daughter-in-law. I’ve known Smiley Girl since she was my student at Little Green five years ago, and she’s a perfect match for my middle son. Everyone in the family is thrilled.

They got married on a farm. It’s a working farm, with goats and chickens and several big shaggy dogs. The reception was held in a barn strung with white Christmas lights. A bunch of us gathered there the day before to arrange the flowers the bride’s mother had bought at the farmers’ market. We used mason jars leftover from another wedding. The caterer served food grown locally. The men in the bridal party wore navy blue dress shirts and grey pants, and the women wore navy blue dresses, all clothes that they could re-use. The dessert was gelato, made right on the farm. The bride and groom are very environmentally conscious, and that showed in every decision they made.

The photograph above shows the field where the ceremony was held. As we were all commenting how gorgeous the view was, one of the bride’s friends said, “You can even see a wind farm in the distance. That’s so perfect.” The guests sat on planks of wood balanced on bales of straw. My brother played the guitar. My daughter did a reading. The maid of honor sang. The wedding party included all of the bride’s nieces and nephews, a bunch of adorable kids.

The reception included live music, of course, mostly jazz. My son With-a-Why sang “These Foolish Things.” Drama Niece warmed up the crowd with “When the Saints Go Marching In” while the groom took a turn at the keyboard and my brother led a conga line. Skater Boy, whom we’ve known since he was a tiny kid and who, despite the pseudonym I gave him years ago, is a respectable young man who develops computer software, gave a toast that was touching and funny. The toast was interrupted briefly by a sheep wandering into the barn and right up to the microphone. Then the maid of honor, who has known the bride her whole life, gave another toast while the musicians played with the baby sheep.

The guests were mostly family, but for us that includes our long-time extra kids, even the ones who live in far-off places now. They all showed up, young adults now rather than teenagers, all of them looking so grown-up that I felt nostalgic for the days when they hung out in my living room, jamming and playing games all night. And of course, even in the midst of so much happiness, I felt sad that Blonde Sister, who died last November, couldn’t be with us to celebrate the wedding of the nephew she’d helped raise.

The bride and groom, like most young people nowadays, kept the traditions they liked and discarded outdated traditions. The little kids (and many of the adults) walked down to see the goats and wandered about the farm looking for chickens and dogs. Young people played Kan-Jam and a giant set of Jenga outside the barn. Old people and young danced to jazz music. Everyone stood around talking, eating gelato. And the best part of the whole day was the realization that Smiley Girl, whom we all love, is now officially part of our family.
Posted by jo(e) 21 comments: 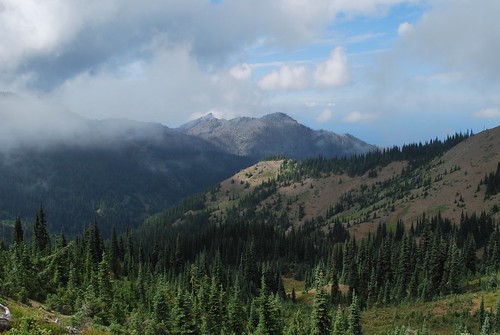 What I love about the Pacific Northwest is that the landscape is so varied. We hiked up mountains, we walked on sandy beaches, we hiked through a rainforest, and we spend an afternoon climbing around rocks as we searched tide pools for starfish. Every morning, my husband and I would find a diner where we could eat a huge breakfast while we planned our day. "Shall we go hiking? Shall we find a beach? Where should we go for the sunset?" It was lovely to spend a whole week doing nothing but visiting beautiful places. 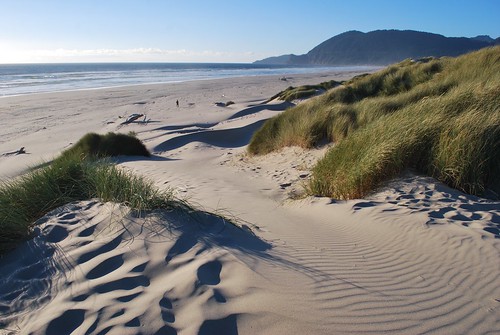 That tiny figure on the beach in the bottom photo is my husband, searching for the best place to watch the sunset.
Posted by jo(e) 12 comments: