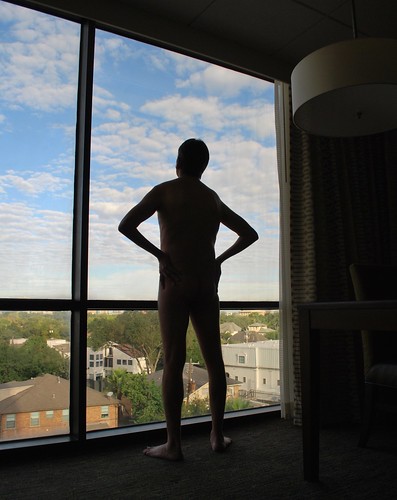 “So who is going to pose naked for me?” I asked. I looked at my friends, who were holding wine glasses, balancing little plates of appetizers, and mostly ignoring my question. These friends have attended many conferences with me. They know the routine. I can’t go home without a naked photo. It’s a tradition – one that most of them choose to ignore. Artist Friend, for instance, just rolled his eyes and tried to change the subject.

But Medieval Woman caught my eye and smiled. Then she pointed quietly to her husband. “I think it’s his turn.”

That’s the advantage of being part of an academic couple. When someone at an academic conference asks you to pose naked, you can volunteer your husband.

I arrived at their hotel room with my camera bright and early the next morning. I knew I’d have to catch Darwin before the day began: conferences have this way of sucking my colleagues into sessions when they really should be doing more important stuff like posing naked for my blog. Medieval Woman greeted me with the cheerful demeanor of someone who has gotten out of posing. “Natural light!” she said enthusiastically, yanking opening the curtains. She and I began pushing the furniture out of the way.

“How do you want to pose?” I asked Darwin. He was sitting on the bed, wearing boxer shorts and socks, rubbing his eyes.

“Whatever,” he muttered. He’s not a morning person.

I’ve always thought that if I took a naked photo of Darwin, I’d ask him to pose with his guitar. He’s a terrific musician. But alas, he’d come to the conference by plane, which meant he’d left all musical instruments at home. “He can be a silhouette in front of the window,” Medieval Woman offered.

By then Darwin was beginning to wake up. Perhaps it was the cool morning air hitting his bare skin. “So am I going to be the object of the female gaze?” he said teasingly. “All these women who are going to be looking at me …. ”

While his wife and I were still trying to figure out the best pose for him, he stripped off his boxer shorts and walked over to the window, hands on his hips, staring out at the landscape. The pose was so typically him that I snapped the photo.