I was wrong about that.

The only thing that saved me, I think, was my years of experience living in a household full of teenage guys. So I am used to surviving in a cloud of testosterone.

And of course, there are certain advantages to hanging out with a gang of men. I am the kind of person who feels guilty if I leave food on my plate in a restaurant, but I no longer had to worry about that. As soon as I announced that I was full, this group would swoop in with their forks and finish whatever food I didn't eat. I will admit that the constant banter and jokes and insults that they tossed back and forth kept me entertained. And the conversation improved after I announced a moratorium on talking about football games or stock car races.

The small suite got more crowded as the week went on. Artist Friend, deciding that he needed help in driving me crazy, invited his thirty-something brother, Loves Wildlife, to drive up from the State That Sounds Breakable and join us for a night. Of course, I was thrilled to finally meet Artist's Friend's youngest brother – he had the same laugh, the same teasing energy, the same intense interest in nature – but since the suite was tiny, with every bed already occupied, there was some question as to where he was going to sleep. The guys were happily arguing about who was going to share the pull-out couch with me when I announced that there was plenty of room on the balcony. Loves Wildlife, unbelievably, produced a sleeping bag, climbed out the window, and camped out under the night skies of City Like No Other.

On Friday night, I waited until my male friends were all properly inebriated before reminding them of a tradition I have with conference roommates: one of them was going to have to pose naked for my blog.

My readers, I explained, were expecting it.

I tried Artist Friend first. I thought someone with an artistic temperament would be comfortable with the idea of nudity, and supportive of a friend trying to take an artistic photo. I also thought that Artist Friend, honored that he was the first real life friend I told about my blog, would be loyal to me and my blog readers. But alas, that was not to be. Any readers who have conjured up this picture of Artist Friend as a sensitive, loyal guy, a friend who would literally give me the shirt off his back, or at least take off his clothes for my blog, will be disappointed that he dismissed my brilliant idea with a single emphatic syllable: "No."

And he followed that up with a look that meant, "Are you fucking crazy?"

Philadelphia Guy, after all kinds of incredulous looks and several beers, eventually said, "Well, okay." When Artist Friend expressed his horror, Philadelphia Guy shrugged and said, "I can't say no to jo(e). No one can. Even the Famously Surly Waiters at the Well-known Deli in City Like No Other were nice to her." But his lack of enthusiasm – and his muttering about how he didn't have tenure yet – made me think he was not an ideal candidate. Chicago Friend said nothing, but it was clear from the expression on his face that he was quite happy with the twist in fate that put him in a hotel more than ten blocks away from me.

LovesWildlife, on the other hand, had the proper attitude. He kept laughing and saying things like, "What? You want me to go out on a balcony in the middle of the city butt naked? You've known me for four hours and you think I am going to pose naked for your blog?"

Here, clearly, was the weakest link.

So late that night, LovesWildlife stripped off his clothes and climbed out the window to the balcony. I had planned to take the photo in daylight – natural light is so much better for any kind of photo – but he explained very nicely that there was no chance in hell this event would take place in broad daylight, and that if I wanted a picture, I had better take it now. Artist Friend, who did not seem thrilled in the least at this turn of events, took one glance out the window at his naked younger brother and retreated to his laptop computer, taking comfort in a manly array of football statistics on the Bengals' website.

My original plan had been a nice portrait of all my roommates together, but LovesWildlife was emphatic that there would be no other men in his photo. It's funny how peculiar men can be about those things.

I had explained that I don't show faces on my blog, and LovesWildlife seemed to take that rule very much to heart. In fact, once he had tossed aside the towel he was wearing, he refused to turn even to talk to me, so our conversation consisted mainly of me shouting things to the back of his head. I kept coming up with brilliant ideas: "Maybe you should sit on the ledge! How about if you are tossing flowers off the balcony? Maybe you could be holding a beer? Could you perhaps burst into song for the benefit of all those people peering out their windows?"

And he kept saying things like, "Are we done yet? WHERE IS MY TOWEL? WHAT DID YOU DO WITH THE TOWEL?"

Artist Friend, still muttering football statistics, was no help at all. In fact, his sarcastic comments kept making me laugh, which is not such a good thing when you are trying to take a serious artistic shot. And Philadelphia Guy, unnerved by the whole photo shoot, had retreated to a bar up the street. I have no idea what any of those people peering out their windows at the balcony thought, but I think the photo came out quite well. 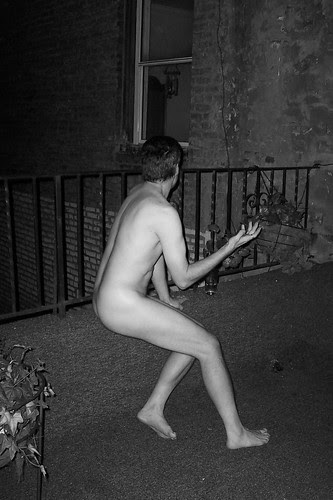 LOL! So good to see the tradition continue!

What a good sport that LovesWildlife must be. I bet he was chilly. hee, hee.

I am laughing so hard right now that my office mates are staring at me.

jo(e), you have seriously raised the bar on blogging. It just doesn't get better than this.

Wow. I can't even imagine convincing my *husband* to do that, much less one of my other male friends.

You are an amazing woman, jo(e).

That's fantastic. I didn't realise it was a tradition - I'd better start scouring your archives.

this is too funny! you know, people get arrested for things like that in Big City Like No Other.

Glad you made it to Well-known Deli and that the surly waiters were kind to you...

I don't know--that looks like a photo of Gollum to me. Put a half-eaten raw fish in his hand (plenty of those at the Chinese markets around the corner) and you've got something. Niccce assss, my preciousss.....I'm thankful, at least you didn't post the one of him squatting like a shaved squirrel monkey over the potted plant.
Artist Friend

Oh, that was too funny!

Hey ArtistFriend, bite me! I think the photo came out quite well also Jo(e). LovesWildlife.

Hey, LovesWildlife: Want me to announce to my readers that you're single?

Hey wait, I know that guy!

Masterfraud (whose blog recently passed away...)

Oh, my Gosh! I think that LovesWildlife is my cousin...who IS single and looking!!

Can't Say Who I Am or Where I Live!

Who knew I'd get such a thrill!

Oh my goodness! That is *too* wild! Kudos to Loves Wildlife for being such a good sport! LOL!

Blogger has been down for the last hour so it wouldn't let me comment but I just had to come back and say, "Well done!"

LOL! What an interesting series of events....

The tradition continues! You never let us down jo(e). LovesWildlife is a terrific sport.

Love the photo, and I love the story even more.

That deli is soooo delish.

He is very cute, but what is he doing? It looks as though he is playing air guitar. (Not that there's anything wrong with that.)

I am so never going to a conference with you...

On second glance, LovesWildlife of the naked butt is not the cousin in mind, who is actually of raven hair and skinny legs, from a Plain Jane state. And, the cousin in mind is now in Paris, enthusiastically observing [?] the nightlife's wildlife, rather than taking delicious bites of life out of The Big Apple. But, what a wonderful story!!
Can't Say Who I Am or Where I Live!

You must be VERY pursuasive! I couldn't get any of my male friends out on a balcony naked (and believe me I've tried!)

Glad you enjoyed the city like no other! Come back soon!

tell me something....do your kids take up donations for bail money before they let you go to conferences? Just wondering.

You are really something Jo(e).

You don't have any naked pregnant shots on the blog, do you? Are you coming to Boston? I may have to pose for you.

And thanks Jo(e) for announcing that I'm single without express written consent from the National LovesWildlife Naked Butt Society first! Goofball...

And yes, Jo(e) is very persuasive. I think it's those expressive jovial eyes and fluttering eyelashes of hers. Or, wait, it may have been the whiskey, vermouth, and beer mixture. I don't remember!?!

I think we should all adjourn to Pilgrim/Heretic's for a round of drinks for LovesWildlife, not to mention some sort of prize. Very cool! And just too funny.
Are you going back to the City Like No O

LovesWildlife: Hey, if you were willing to let me post a naked photo on my blog, I figured I didn't need express written consent for anything ....

Halloweenlover: Oh, I need to get to Boston before Christmas, right? My blog readers would love that.

Susan: Blogger has been difficult these last few days -- and cut off your comment. Or perhaps you got censored?

I had to exert all kinds of self-discipline to NOT scroll down till I had finished reading the post. It was totally worth the wait!

(I can't believe I wrote a comment and then accidentaly closed the window. I'll try to write it again...)

It started like this: (deep sigh). Oh Jo(e), your absolutely crazy, but a good kind of crazy, one that I really really really like and which makes me "want to be you" for the thousandth time.

The comment section is great fun too, what with LovesWildlife himself commenting and stuff.

You are a HOOT! And hey, Loves Wildlife: Nice butt.

I guess I'm happy that jo(e) isn't able to be as persuasive with her blog readers. :-)

Danny: It's those blogger meet-ups you have to watch out for.

This is such a funny tale!

Great story and another great photo. Good for him for doing it for you! It is a good shot, very clear and nice physique.

OK Now I know why your blog was blocked by my school filter. All these goings on... And I told the tech director you were just an English teacher and the filter was wonky.

i have just choked and gasped and chortled and snorted my way through READING THIS ALOUD to hubby, and even the comment by Artist Friend (i had to come up for air before attempting that one), and hubby's response was, "that's exploitive!!"

i don't think he is signing up to room-share at your next conference....