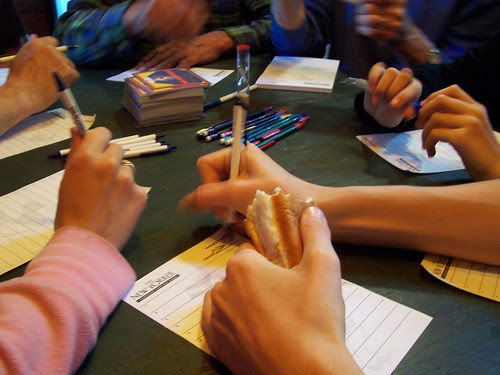 When my extended family gets together, we play card games or board games or any kind of game that can somehow involve small children, their grandparents, and everyone in between. Rainy days at camp, we play on the floor of a tent or at the wooden table in the cabin. At home, we are usually gathered around my mother's kitchen table. The card game we play most often is pitch, a game that my father used to play everyday when he was growing up. But we test out new games, too, the ones that come in and out of style.

I like the game that comes with cartoons that have no captions; we each have to write a caption. Someone reads all the captions aloud, and we not only vote on which is the funniest, but we also guess who wrote each caption. Sometimes it's easy to tell who wrote the caption, but the quiet members of the family often surprise everyone. Last time, for instance, we were all looking at a cartoon that showed a turtle and a rabbit in bed together, with the turtle pushing the rabbit away. The winning caption was: "Whoa there, hot stuff. Slow and steady wins the race." The caption was not written by one of the adults or the teenagers, but by my youngest son, With-a-Why. Clearly, he needs to spend more time with kids his own age.

The other game that we've been playing a lot this summer is a game that my new sister-in-law invented. To play, you cut up sheets of paper into dozens of little slips. Everyone begins filling the slips with the names of anyone famous they can think of: living, dead, or fictional. Each slip gets folded once and tossed into a big bowl, and when the bowl is full, we divide into teams. We turn over the egg timer, and a person on the first team picks a slip of paper and then describes the famous person until their team guesses the person. They see how many they can get before they run out of time.

The game gets tricky when you have members of several different generations playing the game. My father, faced with the slip of that said, "Shania Twain," just went for the part of the name he recognized. "Well, she could be the sister of the person who wrote Huckleberry Finn." With-a-Why kept putting in obscure figures from Norse mythology, and soon everyone was groaning at the sight of his handwriting. Sometimes the urgency of the game led to rather understated descriptions: "Bad guy. World War II." And sometimes, a player would change their mind about who they thought the person was: "He walked on the moon. No, wait, he played the trumpet." 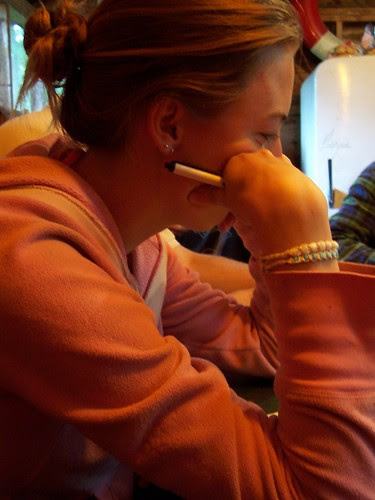 My daughter, deep in thought.
Posted by jo(e)

What a great game! We have the same sort of generational differences when playing "Apples to Apples."

jo(e) - I have been lurking for a long time and deeply enjoying your blog. I've played a longer variation of the game you described - we call it "Celebrity" and it is played in three rounds (each round ends when all the names have been drawn). The first round is exactly the same as your game; the second round is where things become more intricate as you draw from the exact same pool of names as the first round but you are only allowed to use one word to describe the person; finally, the third round is played entirely silently - you have to act out the name. This is always my favorite round, as desperation to be understood will lead to some crazy acting.

I've decided that when dear-son gets back that I'm instituting a game night! Since there's only 3 of us, we're going to have to recruit some neighbors to come play!

labibliovore: Oh, we are going to have to try your version!

These sound like a lot of fun. I really have to work to convince the adults in my family to try out these more creative games-they get squirmy at things that aren't in the mold of Monopoly or pinochle.

From a lurker here - I would like to know the name of that cartoon game.
Is it one you all created or can it be purchased?

cathy: It's the New Yorker Cartoon Caption Game. Someone gave it to my parents for Christmas.

What great games!! Your family is so much fun.

Songbird mentioned "Apples to Apples" and I was wondering if you'd given that one a try. We play it with my sister (who is 12 years older than me) and two of my nieces, the youngest of whom is 20 years younger than me. We generally take out the nouns that they wouldn't know before we start, but it's incredibly fun and funny.

Jo(e), I so love that your family plays games (though I am not surprised)! I grew up in a family like this too, and, in fact, we have a good family friend who is a game inventor. He taught us one that I think your family would excell at: it's called "1000 blank white cards."

To play, all you need is a pack of 1000 index cards, and something for each person to write with. At the beginning, each person is given 10 cards and may write on or illustrate them however he or she likes. These become the started deck, and are combined, shuffled, and dealt -- five to each person. Two piles are placed in the center of the table: the pile of extra starter deck cards, and the (much larger) pile of blank cards.

And that's it! Everything else is up to the players' imaginations, and the game may be as tame and orderly as you like, or as crazy and uninhibited! The great thing about it is: the more you play, the more your family's deck will grow, so each successive game is more and more interesting.

To give you some ideas, cards from my family's deck include ones that say: "Your name is now Captain Looney Pants; anyone failing to address you as such for the rest of the game must sing a song of your choice." "Keep your hand in a glass of water until Pete says you may take it out." "You're now a duck. Await further instructions." (Series of cards or cards that play off of each other are loads of fun!) "You must pay a compliment to each of your siblings." (My mother's doing.) "Pete is Supreme Emporer -- you must make him a sandwich." "Do not read this card aloud. You are no longer permitted to use the word 'it.' You are not allowed to explain yourself."

Anyway, you get the idea! If your family ever tries it (oops! I mean, "the game"), I'd love a post about the results!

J: That game sounds perfect for my family. We are going to have to try it.

Abby: Yes, we've played "Apples to Apples" but it's not as popular around here as some of the other games.

Apples to Apples is not much fun with more than about 6 people, so that makes sense. J's game sounds really fun.

If you've never played either, and you're interested, just send me an email, and I'll be happy to detail them for you. :)

I may have to use some of these games. :)

I love the blank card game! I'm going to have to share that idea with our virtual cousins, who have been the source of so many games while I was growing up.

Spoons is fun, as is Botticelli (what we call the game you describe, jo(e)). Two others that are fun are Sentences and Fictionary.

In variation two, you start again with one sentence, but this time the second person draws a picture illustrating the sentence (there's an online version of this game somewhere). Then the third person writes a sentence describing the picture. You go around the circle, alternating pictures and descriptions until the end. Then you share the pictures and the sentences; one fun way is to read the first and last sentences first, then share the intervening steps.

Fictionary, which is my utter favorite, is best played with a large, prone-to-obscure-words dictionary. The person who is up selects a word from the dictionary that no one else knows. They then read it aloud and spell it.

Everyone writes it down on a piece of paper and adds a brief "definition" and signs it, then gives it to the person who's up. (That person, meanwhile, is writing down the real definition on his or her card.)

Then the cards are shuffled and given numbers and read aloud, one at a time, by that person. After everyone's had a chance to think about them for a few seconds, they are read aloud a second time as a refresher.

Play then continues on to the next person in the circle.

What's fun is the combination of weird actual words and strange-but-plausible fake definitions, and seeing if you can figure out other people's definition styles. Often the fake definitions are far more memorable than the real ones!

Rana: I love Fictionary! I'm used to the commercial version (called "Balderdash"), but I love the idea of picking one's own words.

More detailed info (and variations) on 1000 Blank White Cards can be found on Wikipedia. I didn't realize it was such a widespread game, but apparently it has grown over the years! Fun. :-)

When we were kids we would play pitch for hours out on the front porch. It's been so long, though, I don't remember at all how to play it.

Klee: I love the game Spoons, but it's been known to get kind of violent around here.

It's funny how games have different rules and different names in different parts of the country. The game Rana calls Sentences, we call Accordian Poems. But I've never tried the second variation of it. That sounds fun.

I too like Fictionary, which someone at some point marketed as Balderdash.

Oh I am definitely stealing this game and calling it my idea. :) Fabulous!

My family's version of Botticelli is played sort of like 20 questions. Each person gets a turn being "it". It thinks of a famous person (living, dead, or fictional) and tells only the first letter of the last name. The other players ask, "Is it a composer (or artist, or writer, etc.)" and It has to answer, "No, it is not (name of a famous composer or writer or artist)". If It can't think of an person with a suitable name in that field, then the questioner has to say who THEY were thinking of and then gets to ask an eliminating question like, "Is this person alive (or in the arts or female)?" and then all questions and answers have to stay in the non-eliminated categories.

Famous LIVING people who have only one name are not allowed. Sting and Prince are out.

Could I please come to your house for my vacation?

Your life seems so nice as you pick berries, hike, sing, paint, love your children and even drop your towel.