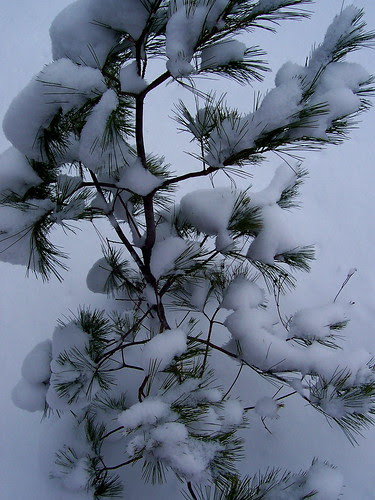 Yesterday, I spent much of the day watching student presentations — three classes of my first year students took up the whole afternoon, and then in the evening, the upperclass students who serve as peer mentors did presentations about their experiences as mentors. I love watching presentations because I learn all kinds of interesting things from them, but seven hours of sitting still in a warm classroom tends to get me zoned out no matter how exciting the topics are.

That's why I felt relieved, in the middle of the day, when the four students doing a presentation on outdoor survival skills announced that we would be going outside. Eagerly, we all pulled on coats and mittens, and followed them out of the brick building into the cold, snowy world. A wind filled with wet snowflakes slapped me wide awake. The group had prepared ahead of time; they'd found a spot not too far from our urban campus that could pass for wilderness, if you were willing to ignore the tops of the buildings you could see above the snow-covered trees.

Students in the class, happy to be outside after a day of classes, came sliding and running down the hills, some rolling right through the drifts of snow. Then we gathered around while TossesHisHair showed us how to build a shelter from sticks and tree branches. We built a shelter in no time at all, and then another student talked about sources of food. We learned how to make traps to catch small edible mammals. All this activity was punctuated by occasional skirmishes and snowball fights, but mostly, we were all listening closely.

Students kept turning to me with smiles, just happy to be outside where the branches over our heads were piled with fluffy white snow. Just as we began to feel cold, standing in our semi-circle, QuietStudent cleared a patch of ground, brushing away the snow as best he could, and kindled a small fire using flint and steel. I think we would have all liked to stay there longer, warming ourselves by the fire, but since what the students was doing was most likely illegal, we had to kick the fire out after the demonstration and hide all evidence we'd ever been there. Even though we were outside for only forty minutes, I could felt awake and relaxed as we hiked back to campus. 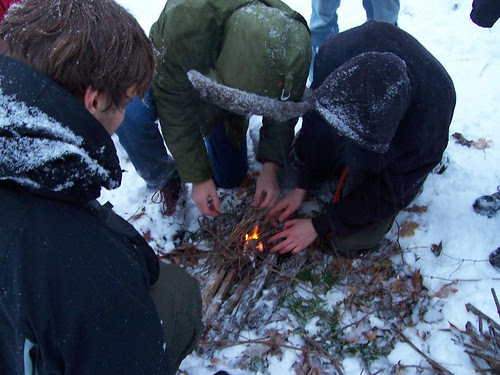 The hands look so cold!!!

I just watched Into the Wild. Hearing your story of the kids teaching survival skills, I wished Christopher McCandless had some of them. I would love to know what they showed in their presentation.

Awesome. I would love to have seen that. I love that kids are so inventive these days. Teachers were not so understanding when I was in college. 25 yrs ago. SIGH I do miss it.