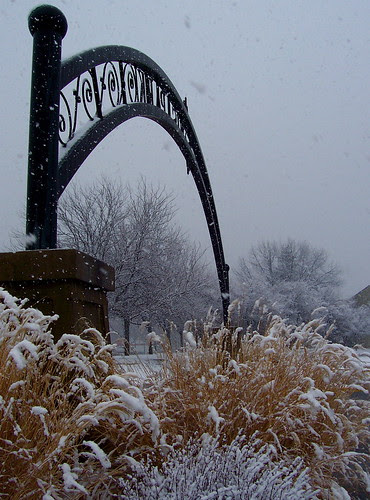 My first morning in Potato State, I woke up early, since my body was still on east coast time. I had a few hours to kill before my colleagues arrived for our long weekend of meetings, so I decided to go out exploring. I had been assured the climate was more mild than the one I was used to, but as I walked, snow began to fall. I was glad I had ignored everyone's advice and worn my red ski parka. I kept passing people dressed in just sweaters or light jackets, which seemed a bit peculiar.

I found a memorial to Anne Frank made of curving walls of stone, with quotes from all kinds of famous people, and I spent a quiet few minutes reading all the text before crossing a bridge over rushing green water. A flock of geese kept me company as I walked through a park filled with trees whose twisted branches were holding up little piles of new snow. There were two small museums, a history museum and an art museum, and I got to the history museum just as it opened. I walked in with two volunteers, and we all chatted in the lobby, since the woman who ran the front desk was just getting organized. They all kept talking about the snow: apparently this city only gets 12 to 15 inches each year. Since I come from a place that gets ten times that much snow, I didn't feel as excited as they did by the weather, but that did explain to me why most of the people I had passed were so inadequately dressed.

I'm used to the really big museums in Big City Like No Other, but it was fun to walk through a small museum, where I actually had a chance to look at every exhibit. I learned all about the Oregon Trail. Well, mostly I got the idea that the pioneers had lots of guns. When I got tired of looking at guns and wagon wheels and maps, I ducked out and went over to the art museum, which had the kind of random assortment of art you might expect in a small museum. One room was filled with ship models that looked very old and weathered, but the video in the side room showed the artist making them out of random things like curtain rods and computer keyboards. In the interview, Ship Building Artist said that his friends were always dropping off all kinds of broken stuff, and the video showed his garage just filled with bins of junk. I began to wish he was my neighbor because I could see how that would be a great way of getting rid of stuff.

The ship models were so cool that I figured I would take a picture. I thought my father would like them, and so would Artist Friend. The big windows that overlooked the park were letting in plenty of natural light. I pulled my camera from my pocket and was holding it to my eye when the lone security guy walked over to me.

"I'm sorry, but you can't take pictures of the artwork."

I looked at him in surprise. "But I'm not using a flash."

He looked apologetic. "I'm not supposed to let anyone take pictures of the artwork."

I put the camera back in my pocket, and he gestured at the big windows. "You could take pictures of the snow."

I laughed, and he gave me an odd look. I didn't have the heart to tell him that I live in Snowstorm Region, and by the end of February, I'm kind of tired of taking photos of the snow. When I told him that I was from out of town, he immediately said, "Oh, you're here to go skiing." Every person I'd met had said that, and I was flattering myself that I must look athletic, the kind of person who OF COURSE would be skiing, until finally it occurred to me that everyone was making that guess based on the coat I was wearing. I chatted with him for a few minutes, and then I wandered back through the museum. When I went outside, I obediently took a few photos of the snow. 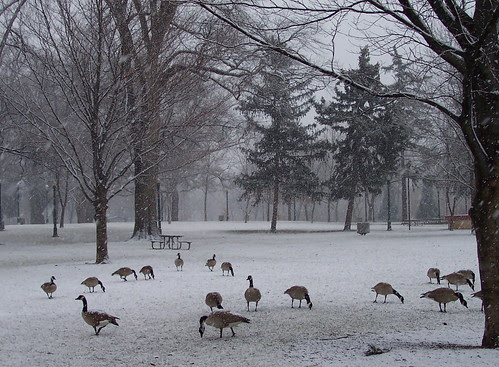 Oh, jo(e), these are such terrific photos, both of them. Breathtaking.

I love the arching metal, like the headboard of a bed and the grasses as pillows and then blankets of snow - and I like canada geese too, although we don't see them in the winter, I expect they will come back some time in the next month.

they are both stunning photos. love the story of your morning, too! the ships sound fascinating.

my son lived in the potato state for a year, way up in the skinny northernmost part. he said all the potatoes to be found locally were imported from the st*rbucks state.

I like how the security guard was trying to be helpful....

Ooh, I think you were in Fun Capital City of Potato State. Matt and I drove down there once from Large-ish City in Easter St*rbucks State, when we picked our snakes up from the breeder from whom we bought them. I loved it! The zoo was fantastic, and that park. Everything.

Those look like our kind of snow. Whenever we have had snow this year I run outside to take pictures. I have wondered how anyone could get tired of it, but then I think of course it gets boring after a long while. But then, maybe not if you go somewhere else and see someone else's snow...

What is really interesting is seeing how other people react to what is unusual to them but common to you. You can stand back and be amused that they think you have the same perspective they have because you look like a visitor that is prepared for what surprises them.