When we give ourselves wings

In my part of the world, February is a long month that stretches for at least 94 days. The roads are snow-covered and icy for most of the month, which means that by the time I get to any destination, I have a tension headache from gripping the steering wheel so tightly. By February, the mittens and gloves we hang in racks above a heating vent are beginning to smell sour from getting wet repeatedly. And despite expensive snowboarding socks, my feet are always cold. But the worst part of February is that it's a month of dark nights and re-opening emotional scars. Long winter nights can bring hours of melancholy introspection and self-hate.

That's why it's become a February tradition for my Wild Women friends to have a pajama party. Slumber parties, we decided a few years ago, should not be reserved for the junior high crowd. Women of all ages need giggling and dancing and chocolate to ward off those February blues.

We gathered yesterday evening, each woman following the long-established tradition of bringing way too much food. Both the counter and table were soon filled with veggies and dips and salads and sushi, enough food to last us about a week, rather than the 24 hours we actually had. It's hard to feel blue when I am surrounded by close friends, with a bowl of hot soup in my hands and guacamole at my elbow, and the sound of laughter rising above the crackling of the fire.

In the long-respected tradition of slumber parties across the country, we stayed up late, talking and eating, dressed in flannel and fleece. I am pledged to secrecy as to what exactly went on during those late night hours. ("Did you dance naked?" one of the husbands sometimes asks, with this sort of hopeful tone in his voice.) And in the morning sunshine, we stayed by the fire for hours more, still in our pajamas, carrying through with some of the deep conversations from the night before.

By lunch time, I was just coming to the realization that four hours of sleep is not enough for a woman my age. But we brushed aside the sleepiness with a hike in the woods, walking through about six inches of fresh snow that had fallen the night before while we were busy with massages and conversation. Puffy clumps of snow decorated the bare branches in the woods, and three of my friends could not resist beginning a snowball fight. We hiked to a grove of hemlocks, and Quilt Artist kept looking up at the branches above us, saying, "See, I could use that pattern for a quilt."

As we walked back to the house for another meal, a valiant attempt to finish up the leftover food, Makes Bread and Quilt Artist stopped to make angels in the snow. 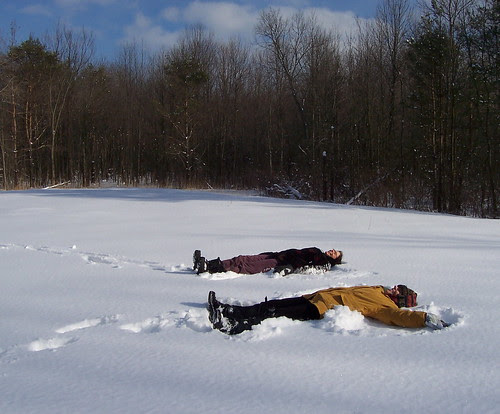 That's definitely the kind of "grown-up" I want to be. You guys are cool. :)

when we give ourselves wings indeed!
Marvelous, simply and truly

But the worst part of February is that it's a month of dark nights and re-opening emotional scars. Long winter nights can bring hours of melancholy introspection and self-hate.

Oh, wow. I thought it was just me. I guess I need to gather my friends around me for a pajama party :).

A brilliant way of chasing the blues away.

What a wonderful post. I'm behind on my blog reading and of all the many unread posts in my bloglines reader I chose yours this morning because I thought, it's always inspiring to read Jo(e)'s posts. I'm glad I did, and your post cheered me up. The slumber party sounds lovely.

I love slumber parties but never make past the first round of dip and chips. My graduate school friends came over and we had a music download/share party and it lasted until after midnight and finally, I fell asleep while the kept a kicking it, or that's what they call it, kicking it. Love the snow angels. YOur friends seem so cool.

Where do you all gather? And how many years have you been doing this?

Sounds like you have a wonderful group of friends! The mention of guacamole almost sent me running to my kitchen to make some. Yum!

I am soooo jealous (well not for the 94 days of February.)

I love the snow angels!

Writer Chica: Well, this particular group of friends has been getting together for gatherings for .... I don't know .. maybe ten years? In October, we go for a weekend to a camp in the mountains owned by Signing Woman's family. We've also gone to a camp owned by Beautiful Hair's family. We sometimes have full moon ceremonies or other parties at Quilt Artist's house. Reiki Woman usually has us all for a Christmas party. Gorgeous Eyes had us to her house for a party that included karaoke. The annual February pajama party takes place at my house and coincides each year with my husband being out of town.

This looks like the MOST FUN ever. I love love love grownup pajama parties. You sure know how to have a good time, Jo(e).

So, what'd you do, lock all the boys in the garage for the night? I KNOW there are no boys allowed at pajama parties.

This is just the thing February was made for! Your lovely photos make me wish we had snow here this weekend. We usually do, but this year it's in the 60s for some freaky reason.

That sounds wonderful! We do need that every now and then. :)

My usually oppressively hot state is at its best in February. High 60's today. I'm sending you a comment of full sunshine with the sounds of little birds making new families.