The first night of my trip, I stayed alone in Southern City Hotel. I had planned, actually, to have a day to explore and take photos before going on to my conference. I almost always try to stretch out conference trips to include some sightseeing of the region. If I'm going to get on an airplane, I'm going to make the trip count.

Instead, I came down with the most miserable cold. My sightseeing including mostly an early morning trip to the nearest drugstore to stock up on drugs, tissues, and comfort food. The outside air was warm, but even so, I just didn't have the energy to go wandering about with my camera as I had planned. Instead, I curled up like a cat on the window ledge in my room, just waiting for the sun to come and warm me.

When I talked to a friend on the phone, I lamented the fact that I wouldn't have any cool photos to put on my blog. Really, I'd done nothing all day but sleep. The only photos I'd taken were of the building across the way, with all its cool reflecting windows.

She said, "Oh, just take a photo of yourself sleeping in the window."

In my drugged state, her idea made sense. I didn't have a tripod with me, but I immediately thought of two items that can be found in any hotel room: an ironing board and a Bible. They worked nicely to bring the camera to just the right height. From my spot on the window sill, I could look down on the city: people rushing about on sidewalks, lights coming on inside buildings, cabs pulling up to the front of the hotel. When the sun came out, I stretched out luxuriously, and went back to sleep. 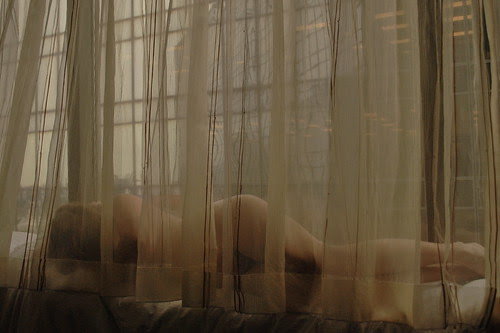 that is a great image. i like the silhouette kind of look that it has.

Very nice, Jo(e). I think you should always take drugs when you go to conferences. ;-D

Word verification is hafflut. You were weren't you.

FA: Yes, I think the drugs helped my presentation too. I got great feedback from the audience. Of course, it's possible they just felt sorry for me ....

Audience....you mean the people in the building across the street? They actually LOOK at naked women there? unlike in CityLikeNoOther..

LOL at YourFireAnt's comment. I remember you taking her photo last year.

I do think its a lovely photo.

If only the Gideons could know what one of their Bibles hath wrought. :-)

word verification: mices
Now where are those cats of yours?

Hate This And I'll Love You said...

That is a beautiful, artistic photo. I love the texture and opacity of the curtains :)

That is terrific. The gauzy curtains make it look more like an oil painting than a photograph.

it is a lovely photo. and very creative use of basic hotel items!

but tell the truth -- you didn't fall asleep naked in the window, did you? i am seeing a careful hedge in your wording.

I did actually take a nap on the window sill, but I was wearing grey sweatpants. I took them off for the picture because they blended in too much -- I just looked like a pile of cloth. Being naked gave the silhouette more definition for the photo.

Yes, I was going to suggest that sleeping naked on windowsills (which in every hotel I've ever stayed in have been COLD and DRAFTY) would be a surefire way to catch a cold if you didn't already have one to keep. So keep those sweatpants on, sister! :-)

Lorianne: I was in the south, so it was pretty warm outside, and the windowsills were in the sun. Now that I'm home, every photo of me until spring will likely feature warm socks and fleece ....

This is such a tender post and it is accompanied by an artful and evocative photo.

I like that the contours of your body are somewhat obscured, so that it's unclear whether you're facing the camera or not or even if you're wearing clothing.

Beautiful, and may I say, rather sensual photo. I never look sensual when I'm sick. I just look sick.

and so I hate to ruin the mood and ask this, but... did you wear the cape for your presentation? I must know!

Jennifer: The cape is a thick velvety material, and it's floor length. When I folded it up, I realized that it would take up too much room in my small suitcase. So I didn't end up bringing it. I guess I need to get a travel cape.