At the conference I just attended, most of my friends are guys. This in itself is not such a bad thing. It means, for instance, that I never have to feel guilty about leaving unfinished food on my plate at a restaurant. As soon as I'm done eating — or sometimes even before — their long arms will swoop in and finish everything on the plate. And since I've got a houseful of teenage boys at home, I'm quite used to living in a cloud of testosterone.

But then there is the duty I have to my readers; my need to come up with a nude photo for my blog. And therein lies the problem. My male friends are terribly squeamish about posing naked for my blog. It's funny. All that is written about women and body image would lead you to think men in this culture would be eager to get naked for the blog. I mean, it's women who are supposed to have self-esteem issues about the body.

I broached the topic of the nude photo at dinner the first night of the conference, figuring that ShaNaNaGuy, who lived the free spirit life of a musician in the 1970s, would be a likely candidate. But the men at the table all had excuses. Philadelphia Guy said no because he's on the job market: "You hook me up with a tenure-track job in the northeast and then I'll let you take as many naked photos as you want." Artist Friend feels he's already done his share: two years ago, he brought his younger brother to the conference and let HIM pose naked on a city balcony. "You aren't going to get ME naked." He tried to switch the topic to football before I could ask again. Then my cell phone rang.

It was a colleague who had agreed to share a room with me and split expenses, a woman I'd never met before. She had just arrived and wanted to meet us in the hotel bar. Artist Friend motioned with his fork. "There you go. She'll do it." And the men at the table breathed a collective sigh of relief.

My roommate turned out to be a sophisticated and beautiful woman with a lovely accent that revealed her roots: she was born in Country Shaped Like Footwear. She had the most wonderful habit of randomly handing me squares of organic dark chocolate and saying, "Here, eat this." She was eager to see my blog, since she was thinking of starting one of her own, to match the website that advertises the many books she's written.

On Saturday, she was sitting on her bed, looking over the forty-page chapter she needed to condense into a twenty-minute talk, when I realized that I needed to take the photo fast before we ran out of natural light. The timing wasn't great, as her talk was in just a couple of hours, but I knew I couldn't let my readers down. "Um, I know you're busy writing your talk, but could you just take off all your clothes and pose for me?"

To her credit, Beautiful Italian Woman seemed to understand my dilemma. She set down her paper and stripped off her clothes in one fluid motion. "Where do you want me?"

We'd been talking earlier about meditation so I'd already planned the shot. "Just sit on the bed as if you were meditating." She sat down in the light that was coming in the window, I snapped the photo, and she went back to the paper she was working on. It was as easy as that.

Yep, that's how it goes. Male friends I've known for years, men who have often assured me that they will do ANYTHING for me, balk at the suggestion that they need to do a simple favor like pose for my blog. But a woman I've just met strips her clothes off without hesitation. 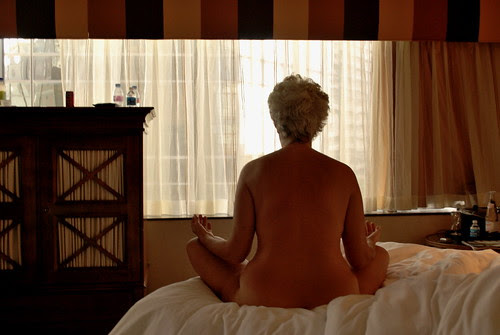 Excellent. Ya gotta love folks from the Country Shaped Like Footwear.

What a beautiful photo - and story. :)

I wonder if the reason why men are reluctant and women are willing is that we're all used to seeing naked or partially naked women in the papers, in magazines, on tv, etc., but not so much naked or half-naked men? But, yeah, men do seem to be fairly timid about being unclothed, especially if they're not the slick, oiled, hard-body type. They tend to be weird about being barefoot, too.

Ooooh I want a friend who randomly feeds me chocolate!!

I think women as they get older get more and more comfortable with their bodies, but men are taught by society to think of nudity as connected with sexuality only. So it's harder for them to see a nude photo as just a photo.

Blogger is being really annnoying. It's taken me five minutes to get your blog to come up.

Anon: I can't get it to load properly either -- everything stays dark blue. Argh.

Imagine living the sort of life where people randomly hand you chocolate and drop their clothes whenever you ask! I want to be jo(e)!

Thanks to my twitter friends, I think I've fixed the problem with the blog. It should be loading properly now.

(I don't like people to have to wait for those nude photos.)

Maybe the nude photo is WHY things got all clogged up. How many hits have you had today?

FA: Oh, good point. My blog used to be the number 5 google hit for "photos of naked middle-aged women" -- maybe I'm moving up.

Gorgeous. I can't wait to go to footwear country this summer and be with the beautiful naked people.

What a great story and beautiful photo. I'm guessing that Beautiful Italian Woman is a friend for life now.

Lovely photo. You must be very persuasive.

It has nothing to do with all this body image...um...stuff. Nobody needs to see me naked, that's all. Sorry. But, good photo!

a woman I've just met strips her clothes off without hesitation.

Yeah, I hate it when that happens.

Wow. That is a beautiful photo. Simply beautiful.

Such a beautiful picture with a lovely backstory.

That is an awesome story, and a lovely photo.

i absolutely think that the reason your female roommate was willing to strip soon after she met you has to do with the trend that men tend to be less comfortable with intimacy than women, especially in a short period of time. how many times have you gotten in a deep conversation with a woman you just met whereas it might take months to get to a similar place even with a closer male friend?