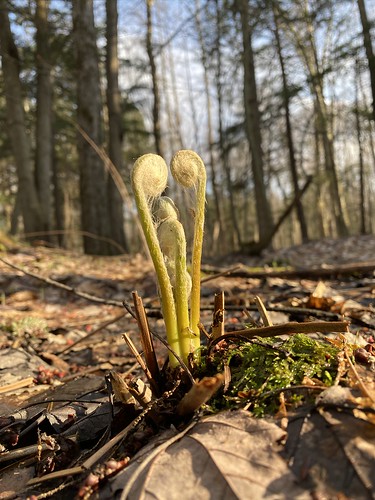 Far back in my woods, in the grove of hemlock and beech, the fiddleheads have appeared. Each little clump looks like a family of aliens, huddled together, keeping their distance from any other clump.

That's what my extended family feels like right now. Nine households, all within fifteen miles of each other, but each little group being forced to keep to themselves. We wave through front windows and talk from porches. We chat over computers and smart phones. My husband and I have several times driven to my oldest son's house, just to talk to Totoro Grandson through the glass window. What a weird impression of the world that six-month-old is getting. Maybe he thinks his grandparents are characters on a television show.

Yesterday, the weather was sunny. Beautiful Smart Wonderful Daughter and Sailor Boy found out that a local Italian bakery had takeout service, so they picked up boxes of treats and delivered them to family members. My daughter wanted to paint the shelves in the baby's room, so I found some leftover paint in my basement and put it out on the front porch for her to pick up. They chatted with me through the front window for a few minutes before heading to the Cottage (With-a-Why's house) and then to the Kitchen, where Boy in Black and Blonde Chef live. Later, when I was making meatballs and sauce for my parents, I drove to my daughter's house to get the egg she'd left out on her porch. She gave me a keyboard to deliver to Shaggy Hair Boy, so I drove out the Farm before going to my parents' house to drop off the sauce for their dinner.

It's really like a game of musical chairs, except with the chairs spread really far apart. We're always calling and texting, and someone is always delivering something, but the only time we are all together is on zoom.
Posted by jo(e)

Do you ever harvest them? (Are they an edible kind?)

Seems you are really busy! Yes strange times indeed. Because we have so few cases of the virus now, the Australian government is talking about loosening some of the controls - we'll see how that goes.

It does sound a little like musical chairs. And I love your pretty aliens. :-)

Tie-Dye Brother-in-law: I haven't ever eaten them. And I'm not enough of a botanist to know if the ones in my woods are the edible type. I have friends who could tell me, I suppose, but I don't have enough of them to harvest them in a sustainable way.

We do the same thing here, my brother who lives next door is a gem as he shops for our parent. Stay safe!

Musical chairs indeed. I am sure that many people are more than a little jealous about how close your chairs are.
And I echo the question about fiddleheads: Edible?

Delighted someone felt the need for a keyboard; more than ever before I sense the unifying force of music. As you may know my singing lessons are no longer conducted over my teacher's mini-grand but via Skype in our respective homes. I am denied the hi-fi version of my teacher's soprano voice (even though Skype sound quality is quite respectable) but there is one advantage: sitting in my study I have access to my own Yamaha and can plink-plunk my questions.

It sounds as if I could get along well with Shaggy Hair Boy. My last visit to the hairdresser's is a dim moment in history. If we were doing Liszt songs I'd look the part.

Fiddle ferns are fascinating..and now we have time to observe them closely and see just how much they grow every day.

You are lucky to have virtual contact..with both our families being hundreds of miles away and either too busy or on the Asperger's scale, we don't do phone calls or face time usually..at least we message.

I've been doing genealogy in recent months and it has dawned on me how nice it is we can connect in the way we do. I read of them "pioneering away" from family. However did they get by without stopping by to say hello or wave through the window or facetime or zoom? I love that you can pop over and get an egg and your daughter the paint.

The fiddleheads are wonderful. Seeing these reminded me that it has been one year since a beautiful walk with Rick where I noticed my first ever. I love your description of the distancing. Very apt.

Gorgeous picture- and how apt a description of the times we are living through.
How your family has changed and grown over the years- what blessings you all are to each other.

Well do I know that feeling. And I will go and find some fiddleheads, I hope, tomorrow. Inspired!

I hope you're doing well. Haven't seen posts from you in years now

I miss your writing. I check back in here every few months wondering if you've left any information about medium/substack/twitter/insta accounts ...

Thank you for such a great post you wrote here and I'm very obliged to write an article here on the benefit of herbal herbs.I am 29 years old and have been diagnosed with breast cancer, ease of treatment and a similar story, except for my first acceptance as a rejection of herbal medicine. I was not part of the Perseid movement and did not really build relationships with any of them, I just believed in their operation. I say this because it was during the use of Dr. Itua herbal medicine that I now attest that herbal medicine is real, the phytotherapy Dr. Itua heals my breast cancer which I suffered for 2 years. Dr. Itua herbal medicine is made of natural herbs, with no side effects, and easy to drink. If you have the same breast cancer or any type of human illness, including HIV / AIDS, herpes cancer, bladder cancer, bladder cancer, prostate cancer, kidney cancer, lung cancer, skin cancer, skin cancer and skin cancer. , LEUKEMIA, VIRUSES, HEPATITIS, INFERTILITY WOMEN / MAN, LOT OF LOVE, LOTTERY. ITS CONTACT EMAIL / WHATSAPP: Or drituaherbalcenter@gmail.com/ +2348149277967