In her birthday suit

Observant readers will note that in the photo I posted yesterday, Artist Friend is wearing clothes. Disappointing, I know. The man claims to be all about getting in touch with nature and exploding gender stereotypes and exploring the wild — and he’s got artistic sensibilities to boot. I even had a lovely spot picked out for a photo shoot: his naked body would have been framed in the brass-edged revolving door on 16th street, which is so filled with tourists and street performers and determined young activists that no one would have even noticed him stripping off his clothes. Well, hardly anyone except possibly a few passing colleagues. But he refused to get naked for me.

So I gave up on him and began badgering editors at the bookfair. They were an easy mark: obligated to stand by their tables, they couldn’t escape my advances.

I approached the cluster of thirty-something men at the table of an online journal, figuring that they would love to be part of a blog photo project. They were in fact, all in favor of the project. Up until I asked them to pose. Then suddenly, they started volunteering other men at the conference.

“Men hardly ever pose for me,” I said. “It’s funny, because stereotypes would suggest that women would be the ones to hesitate. But it seems to be men who have issues with their bodies.”

One obliging young man took the bait. “Not me. I’d pose.”

See, that’s what happens. I’ve noticed that there’s a pattern with many of the men who offer to pose. They like to be asked, they like to joke about the photos, they love to tease me about the project, but when it comes right down to it, they aren’t so eager to take off their clothes.

Editor of Environmental Magazine suggested a group photo with a theme: men over six feet tall. He is 5’11”. Of course. Nature Writer Who Plays Ultimate assured me he’d pose if I came to his session, but added he’d need several drinks first. That's another problem: people want to pose naked after a late night of drinking. If I took my camera to some of the late night conference parties, I bet I could get all kinds of great naked shots — and some wild stories as well. But I’m a photographer who likes natural light. I’ve got my standards.

So I asked Ocean Breeze, a woman I’ve known for years. We roomed together at a conference once years before I had a blog, but I decided to invoke the roommate clause retroactively.

Besides, it was appropriate. It was her birthday. “I get to be 54!” she said happily that morning. She and her husband had come to the conference as a birthday present. “Yes, that makes me a nerd,” she admitted. “But I was so excited when I saw the line-up of readings.”

And she is adventuresome. Just a few month ago, she went swimming with elephants. She visited her daughter, who lives in faraway country, and they rode elephants in the water. The pregnant elephant she was riding liked to duck her big grey head under the water, but before she did, she wrapped her beautiful ears tight around the legs of her rider so she wouldn’t fall off. “I felt so safe and loved,” Ocean Breeze said.

We met for breakfast on the morning of her birthday to sit at a metal table in the sunshine outside a bakery, eating bagels and oatmeal. We talked about issues with our aging bodies, about books and writing and plans for a summer get-together. Just before that, back in my hotel room, she stripped off her clothes and posed for the blog. 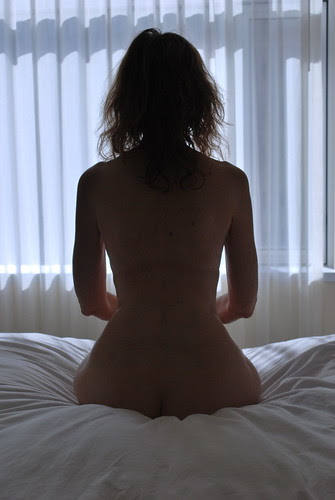 16th Street? Were you in Denver? And some men are all talk. But I do know one man who gets naked without being asked, if I ever see him again, I'll send him your way.

Yes, I was in Denver for a conference.

And yeah, some men have quite willingly posed for me. But it's still interesting to analyze things like gender and age in people's reactions to the project.

I wonder if the preponderance of the naked female form as compared to the male has something to do with it. I do think (and believe data concur) that women have more body issues than men (although we're doing a good job of helping men catch up lately) but the nude female is the norm for naked humans and naked men are seen as deviant. I believe there's a Seinfeld episode about this.

I think Brigindo has a good point. Women are socialized to think they are supposed to pose nude. Men arent.

I love this series. LOVE.

Hi Joe, you are wrong. Men love to pose naked. Though I am in India, and as you said before you cant shoot me or my wife. I am ready to send you naked photos of mine and my wife (together or separate) to put on your blog. I am just waiting for your "YES "and I might be the first Indian on your blog. :)

I love the way you're developing the shy guy aspect of this project.

the shape is so lovely - the triangle of hips to waist.

What a nice shot. Beautiful.

Krishnan: Clearly, I need to visit India, since I've got someone there willing to pose for my blog.

The conversations I have with people while they are posing (or refusing to pose) are the most interesting parts of this project. I wonder just how much of our attitudes towards our bodies come from the cultures we live in.

Krishnan: I'm afraid that I have to take the photo myself. But hopefully, I'll come to India one of these days ....

Hi joe I am happy :D

OOOH this is a beauty.